Duochromes are the gateway shadow drug of the indie world. Those of us who love makeup have our mainstream favorites, of course– I adore Laura Mercier shadows for their smoothness and blendability, and many of Tarte’s Amazonian clay shadows are creamy and pigmented beyond belief. But there isn’t much out there that is quite like a really good indie duochrome. And believe me, Femme Fatale Cosmetics has some really good indie duochromes. So you can imagine my excitement when my portion of a group buy arrived yesterday!! 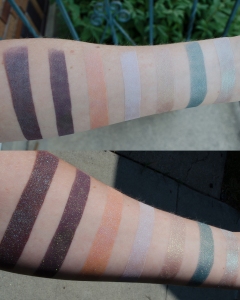 No matter what it looks like, this shadow will always be a manifestation of this to me: 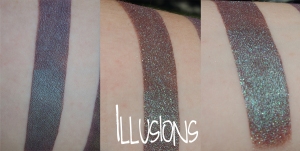 Illusions, left to right in shade, in sun, in sun.

Illusions is a deep, plummy purple with a blue/teal duochrome, perhaps with just a bit of red/brown in it. I was delightfully pleased to find the slight brown in the base, not because I don’t love a deep purple, but because I think it gives a shadow this intense an extra edge of wearability.

Oh MAN, look at that duochrome!! Desecration has an amazing deep purple base with a green duochrome sheen that really shows up when it’s applied over a glitter adhesive. I have a special love for green/purple duochromes, and this one absolutely lives up to its potential! There are definite similarities between Desecration and The Nightmare, featured in this look I did a bit ago. I will put up comparison swatches sometime soon, but I think that The Nightmare has a bit more gold to its sparkle, and the purple base that Desecration has is a bit more warm toned… personally 🙂 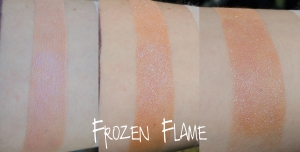 Frozen Flame is a warm peachy color with a frosty lavender duochrome that, like Desecration, shows up excellently over a glitter adhesive. I expected this to make a more intense coral eye, but when applied on the lid it looked more skin-toned than I was expecting, with a beautiful lavender glint.

Opaline Shoal is advertised as a light brown, and it certainly has brown tones, but it comes across more strongly as a cool-toned gray to me, especially in the shade. It has a lavender duochrome to it, and is a really lovely, feminine shade. 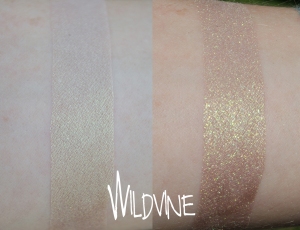 I had initially expected Opaline Shoal and Wildvine to be a lot more similar than what the swatches ended up looking like, but I am really pleased to find they are significantly different. To me, Wildvine has a pale, pinky-taupe base, with greenish/slightly goldish duochrome.

I’ll admit, Seafire was a lighter teal/sea green than I was expecting, but I’m not disappointing! The soft gold-toned shimmer stood our more to me than the pinks that are described on its website description, but the pinks are definitely there. I LOVE teals, and because this one is slightly more muted than some (say, Shiro Maiden Queen), I think I’ll get a lot of wear out of it. So pretty! 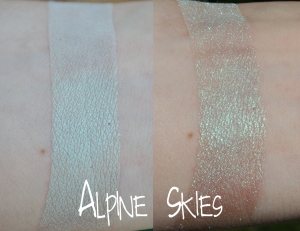 Man, Alpine Skies is almost hard to describe! It’s a light beigy, champagne color with BRILLIANT, almost eerie pale turquoise duochrome. On my skin, the base blends in quite a bit, really bringing out the turquoise, but of course because it’s a duochrome it shows up differently at different angles of the light. I missed out on this color during the first Femme Fatale group buy I participated in, and BOY am I glad I picked it up, because this color is something else! 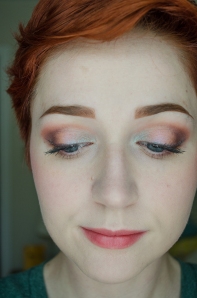 Honestly, I was so excited about these shadows that I didn’t really know where to start! I wanted to put them all on at once, but somehow held myself back. This look is Frosted Flame across the lid, Illusions in the outer V and slightly along the lower lid, and Alpine Skies in the inner corner, with Shiro’s Little Bird blown out in the crease. I applied everything over NARS smudgeproof primer, and then tapped on some Darling Girl Glitter Glue, let it dry down, and reapplied each of them, blending into each other.

I also used Illusions with Darling Girl Superstar Serum for the liner.

I love how Daring Girl’s Superstar Serum doesn’t detract from the duochrome nature of most shadows, but instead seems to enhance it. At least this was the case with Illusions– at some angles, it is the dusky brown-purple, at others it’s the teal duochrome.

I paired the shadow with Shiro’s 1-up blush, some Pumpkin & Poppy Oak Bark for contour, and used my custom orange Shiro gloss (tale still coming!!) but blotted it down to a stain.

And please forgive the sort of lifeless look in my eyes right now– I’m three days into a bad case of tonsillitis, and have pretty much been death warmed over. Which just GOES TO SHOW how amazing these shadows (and makeup in general) are, and holy god I am so excited to use the other shadows in looks coming up soon.

I have yet to try a single Femme Fatale shadow that I didn’t love. Their duochromes are something out of another world. Until I started to try indie products, I didn’t know shadows could do this, but it is magic on your eyelids. Really, it is something very special. Although I wasn’t the organizer of the group buy, I know that Sophie (owner) has fabulous customer service skills and has really gone a long way to making these sometimes ridiculously large group buys happen. That’s part of the reason why I paid the ri-donk shipping to buy some Femme Fatale nail polishes a little later on (like Lunar Halo), I really appreciated the way the company was run. That is something to be noted for US buyers– it’s just the reality of shipping things from Australia, but the shipping is about $15 without tracking, $20 with tracking, $23 with insurance but no tracking… oof da boof! However, prospective buyers shouldn’t fret, because sample baggy orders have free international shipping, so if you want to get your feet wet before getting larger shadows, get a 5 pack or a 10 pack and fall in love!

I knew I wanted larger quantities of shadows, so that said if the opportunity to do a group buy hadn’t come along, I totally would have ponied up the extra money to get the shadows shipped to me, like I did with the nail polish (if I was smart, I would have added some more shadows onto my polish order!). That’s how passionately I’m feeling about these shadows right now. The formula is terrified and applies easily and smoothly, they are very pigmented, and the colors are all incredibly unique and to die for. Super recommended, everybody should give Femme Fatale a try!

Have you tried Femme Fatale products yet? Do you have any favorites?

One thought on “Swatches and Review: Femme Fatale Duochromes”