I have people ask me how I do my brows, occasionally, so I figured I would do a little pictorial to illustrate it! I used the Anastasia brow wiz pencil for a long time, which I like well enough, but I was never able to create the gradient from the inner brow to the tail that I wanted. I switched over to Anastasia Dipbrow as soon as I changed my hair from ginger to auburn red, and I was really pleased with the results! So here it is!

Mmmm, look at those thin, transparent little caterpillars… for me, totally fine for a day of lounging around and binging on Supernatural (YES I AM ONLY JUST NOW WATCHING IT ok?!), but let’s say I want to go out into public and feel bad ass… not so great. Let’s remedy this issue.

First order of business, use a spoolie or another form of brush capable of moving around brow hairs and comb them generally in the same direction. Mercilessly pluck your little stray hairs, for great brows come from a utilitarianism in which no individual may supersede the greater good of the arch. (It might be noted at this point that I apparently subscribe to an extreme version of this, in which I shave off the pretty much invisible outer 1/3rd of my eyebrows, in order to draw in the shape I want. I guess you could say I am a brow totalitarian. Or dictator. I’m not sure, as I’m typing this, I’m evaluating my brow morals).

Does anyone else think dipbrow is a stupid name? That out of the way, take that lovely pomade and some kind of a stiff, angled brow brush. My preference is the MAC 208 brush right now, because it is teensy as fuck and the bristles are a good balance between pliable and stiff, allowing me a smooth line, but also blending powers. Also, this is the Anastasia Dipbrow in Auburn. 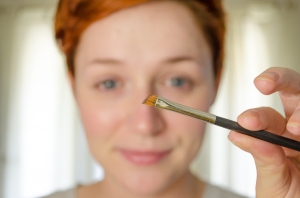 Put some of it on your brush! Too much will be too dark, too little won’t make a line. Practice this a few times, but ultimately with dipbrow, less is more.

Draw the bottom brow line of your dreams, BUT don’t draw it all the way to the inner corner of the eyebrow. Start just slightly out from it, we’ll be going back in in a minute to shape out this portion of the brows, but we’ll be establishing a gradient. 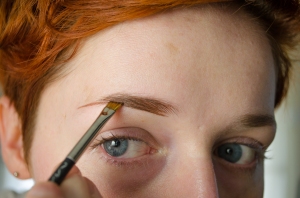 The bottom brow line drawn, go back in without getting more product on your brush (I’M SERIOUS) and fill in the bulk of that portion of the brow, ignoring the inner most portion for the time being. You can see in this picture that I’ve filled in just the middle chunk, leaving the inner and outer for later. Use your brush to blend the bottom line up into your brow hairs. Dipbrow has been pretty waterproof for me, but only once it dries. Work to blend it out fairly quickly to blend smoothly, before it dries.

With the same amount of product on your brush from all that blending, use your brush to create a ‘bottom side line’ to the desired inner edge of your brow. This will be quite a bit lighter than the rest of the brow, which is good, because we’re going for a gradient, right?

Turn your brush so the bristles are flat/horizontal and brush it upward in the space you have created to create a lighter gradient of product, which you will blend back into the pomade you have already brushed into your brows earlier.

Spoolies are important. You can steal them from Sephora. You can buy them from Sally’s. The possibilities are endless. Whatever way you choose to obtain them, get a pack of them, and USE THEM. Comb out the inner edge until you get it to its desired state of lightness, and continue to brush to establish the gradient. You can use your brush (without additional pomade!) to re-darken areas you might have brushed too much pomade from. The most critical step here is to not use too much pomade.

This is where we’re at now. As you can see, we don’t really have a proper tail. I guess eyebrows are really like puppy dogs. Eye puppies. And with this particular puppy, you want it to have a tail (though my aussie doesn’t have a tail, and he’s great, but just come along on this metaphor, ok?). You can take a second to pet yours if you want to, I can wait. Though realistically at this point, you probably shouldn’t touch your eyebrows. 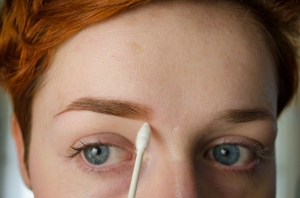 Before you continue on to give your eye puppies a tail, use a q-tip (I recommend the pointiest ones you can buy) and clean up your inner edge so it’s as block-y or smooth as you prefer.

Pick up new pomade on your brush. Locate the upper arch of your brow, and draw a line from it to the outer edge of the tail. Fill in with the pomade, allowing the outer edge to be darker. Using short, rapid strokes helps me to make sure it’s all blended. 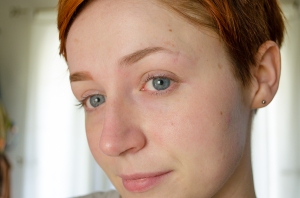 Ooo, look at that.

Aaahhh, eyebrows! If you’re feeling sassy, use some concealer to sharpen your lower edge. If you want particularly accentuated brows, you can also add a line along the upper side of your brow, but for me that ends up looking too ‘drawn on’… pick your poison!

So that’s it! That’s how I use the Anastasia Dipbrow, I hope it was helpful! 🙂