Today was the first day that I thought I might have felt the chill of fall creeping into the air… nothing accentuated, but a sort of hint, a whisper. Or maybe I’m just ready to be done with summer because I’m a white-as-white-bread chick whose ancestry comes from places that don’t see sun 2/3rds of the year. Whatever, potato potahto. Either way, I felt like I had to begin my dark lip practice- you know, wearing dark lips maybe slightly before it’s seasonally appropriate in order to get yourself used to the look (Full disclosure: I think people should wear whatever makeup whenever they want, because feeling fabulous has no season).

What better an opportunity to whip out my darkest burgundy lipstick than to pair it with my NEW SHIRO PRESSED PALETTE THAT CAME TODAY. Caps are necessary because THERE IS NO OTHER WAY TO EMOTE MY ENTHUSIASM ONLINE. Except maybe through italics, which seem a bit like an insane whisper…

Just look at it.

Starting upper left and moving clockwise, we have Whiteout, Doge, War of Five Armies, and Farewell, Wherever You Fare. Let’s see a look!

I went for a more halo-eye type look with Whiteout in the center of the lid, Doge on either side, then Farewell, Wherever You Fare outside that and in the crease, and War of Five Armies to accentuate the inner and outermost edges. I really like MAC’s Fluidline gel liner, so I used Dipdown for the wings.

Now a small confession: I did not actually do arm swatches of the pressed shadows because I was too distracted with actually using them. The pressed shadow formula is pretty dang creamy, and the shadows blend beautifully on the lid. I was pleased with the pigmentation. These are all pretty neutral tones, close to my skin tone, and I think I got some pretty rich colors from them.

I also used Fyrinnae’s Greek Goddess, which I swear to god is one of my favorite blushes ever, and contoured with Pumpkin and Poppy’s Oak Bark layered over Illamasqua’s Hollow cream pigment.

I see this palette really going places with me– the colors are all beautiful neutrals, with a great shimmer to them. Being pressed does make them a little easier to apply than loose shadows.

For the lips, I used MUFE Rouge Artist Intense 48- Satin Blackcurrant over my Laura Mercier lip pencil in Deep Wine. 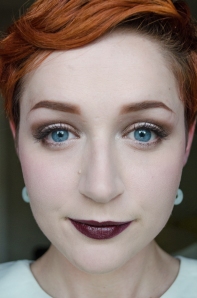 Shiro’s turn around time was exactly as advertised. I ordered on August 18th and my order shipped on August 25th, which is only a week. I believe it was about 14 days when I ordered it. Shipping is also only $2.75, which is always a real boon! I was happy to find that it arrived packed in a thick wrapping of bubble wrap, so it was extra protected.

I’m pretty in love with my Shiro pressed palette. The colors are really perfect neutrals, so I feel like I lucked out in the selection that was available when I was able to access their site (the pressed shadows were so popular it crashed it for a bit… that’s what you get for being so awesome!). The palette and four shadows were $25, but these will be rising to $30 on Sept 1st. Still a very fair price for the amount of work that goes into producing these, and I think the quality of the palettes is excellent. The shadows were really pigmented, creamy, and blendable. I don’t think any of the color quality seemed to be lost between the loose shadows and the pressing. I do have a loose Doge, so I’ll pose some comparison swatches later. Just SO MUCH LOVE.

2 thoughts on “Review: Shiro pressed palette with Whiteout, Doge, Farewell Wherever You Fare, and War of Five Armies”